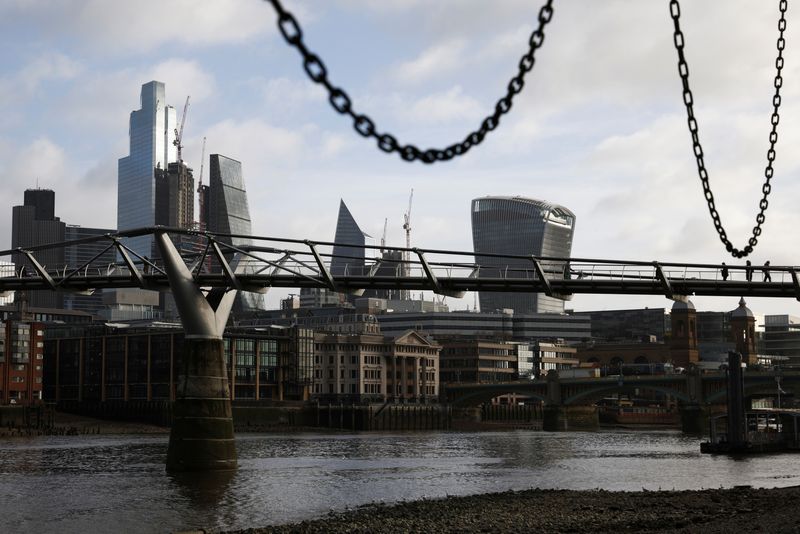 LONDON (Reuters) -British inflation shot up faster than expected last month to hit a new 30-year high, worsening a historic squeeze on household finances that finance minister Rishi Sunak is under pressure to ease in a budget update later on Wednesday.

The Office for National Statistics said consumer prices rose by 6.2% year-on-year in February after a 5.5% rise in January, its highest rate since March 1992.

Britain now has the second-highest annual inflation rate among Group of Seven countries, behind only the United States as global commodity and energy prices soar, exacerbated by Russia’s invasion of Ukraine.

The median forecast in a Reuters poll of economists had pointed to a reading of 5.9% and only three of the 39 respondents had expected such a strong reading.

The ONS highlighted household energy bills – up almost 25% on a year ago – and petrol as the biggest drivers of February’s price jump.

In a blow to poorer households, the ONS said food prices were rising across the board, unlike in normal times when some prices typically go up and others fall.

Sunak will aim to show at 1230 GMT that he is helping Britons through the worst cost-of-living squeeze in decades. [nL2N2VQ0F5]

Options include a fuel duty cut, pushing up the threshold at which people start to pay into the social security system and ensuring welfare payments keep up with inflation.

Yael Selfin, chief economist at KPMG UK, said the figures would also put pressure on the Bank of England to keep on raising interest rates, but she said it was still likely that price growth would peak before long.

“Provided inflation expectations can be managed and global commodity prices stabilise by next year, we should see inflation returning to the Bank of England’s 2% target by mid-2024,” Selfin said.

“This may require fewer rate rises than markets currently anticipate.”

“The Bank will need to carefully balance the need to try and tame inflation whilst not tipping the economy into a recession,” he said.

The ONS said consumer prices rose by 0.8% in month-on-month terms, marking the biggest February rise since 2009.

Last week, the BoE raised its forecast for annual inflation to peak above 8% – more than four times its target – during the April-June period. Regulated household energy bills are due to jump by more than half next month.

Core inflation, which excludes the direct impact of food and energy costs, rose to 5.2% from 4.4% – also its highest since March 1992.

Inflation pressure ahead continued to build as manufacturers increased their prices by 10.1%, the biggest annual rise since September 2008 although it was in line with the median Reuters poll forecast.