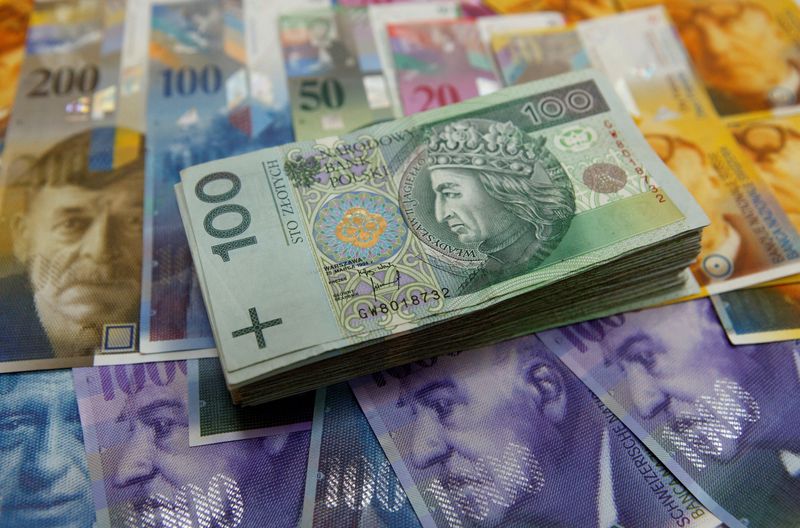 © Reuters. FILE PHOTO: A stack of 100 Polish Zloty banknotes lays on top of various Swiss Franc notes in this picture illustration taken at a bank in Warsaw, July 18, 2011.REUTERS/Kacper Pempel/

ZURICH (Reuters) – The Swiss government on Thursday reported 6.3 billion Swiss francs ($6.33 billion) worth of Russian assets frozen under sanctions to punish Moscow’s invasion of Ukraine, a drop from early April as around 3.4 billion francs in provisionally blocked assets were released.

The figure marked a decrease from roughly 7.5 billion Swiss francs in funds the government reported frozen on April 7. Government official Erwin Bollinger pointed to fewer funds — 2.2 billion francs — newly frozen than those that had been released.

“We can’t freeze funds if we do not have sufficient grounds,” Bollinger, a senior official at the State Secretariat for Economic Affairs (SECO) agency overseeing sanctions, told journalists.

Pressure has increased on Switzerland — a popular destination for Moscow’s elite and a holding place for Russian wealth — to more quickly identify and freeze assets of hundreds of sanctioned Russians.

The U.S. Helsinki Commission, a government-funded independent commission which looks at security, cooperation and human rights issues in Europe, in early May called Switzerland “a leading enabler of Russian dictator Vladimir Putin and his cronies”, who the commission said used “Swiss secrecy laws to hide and protect the proceeds of their crimes”.

The Swiss government rejected the accusations “in the strongest possible terms”, while Swiss President Ignazio Cassis had requested the U.S. government “correct this misleading impression immediately” during a telephone call with U.S. Secretary of State Antony Blinken.

Swiss banks hold up to $213 billion of Russian wealth, Switzerland’s bank lobby estimates, with its two largest lenders UBS and Credit Suisse each holding tens of billions of francs for wealthy Russian clients.

Credit Suisse alone froze some 10.4 billion Swiss francs of that money through March under sanctions imposed in connection with the invasion.

Credit Suisse’s reporting did not make clear how much of that money was frozen in Switzerland.

While banks and asset managers can provisionally freeze funds, SECO officials on Thursday said funds needed to be released if they could not establish the assets were directly owned or controlled by a sanctioned individual.

“The amount of assets frozen is not a measure of how effectively sanctions are being implemented,” Bollinger said, adding asset freezes were “by far” not the most important measure in a wide-ranging packet of sanctions.