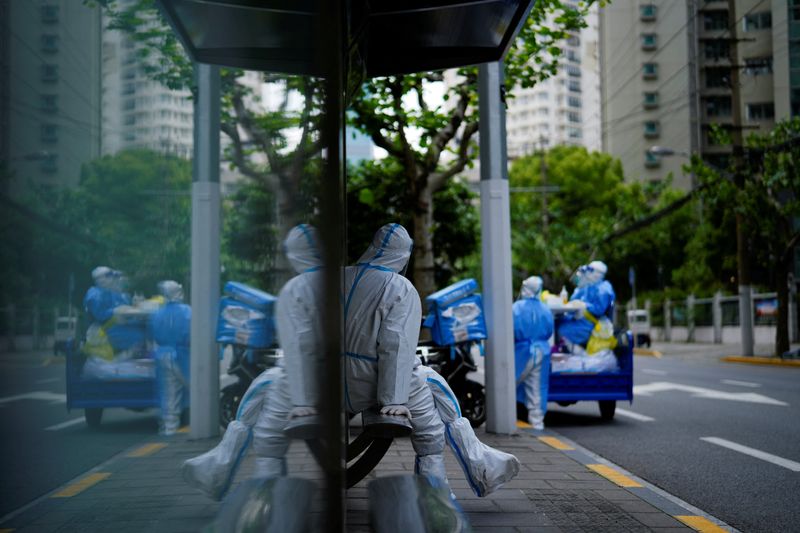 © Reuters. A worker in a protective suit keeps watch at a bus station during lockdown, amid the coronavirus disease (COVID-19) pandemic, in Shanghai, China, April 30, 2022. REUTERS/Aly Song

By Brenda Goh and Min Zhang

SHANGHAI/BEIJING (Reuters) -Shanghai said on Saturday it had detected no new daily COVID-19 cases outside quarantine areas, marking a key milestone in its battle to contain the virus, which has paralysed the city of 25 million and put residents in Beijing on edge.

Streets in the capital were eerily quiet at the start of a long Labour Day break, with residents anxious that authorities would impose further restrictions during a holiday when many typically travel or socialise.

Scenes of homes and buildings in Shanghai, China’s most populous city, where residents were confined to prevent them from leaving, have grabbed headlines in recent weeks when most other countries in the world are learning to live with coronavirus.

China maintains a zero-COVID policy aimed at eradicating the disease, leading to anger and frustration for residents, cooped up for more than a month. Some, struggling to find food and other daily necessities, have shown rare public opposition to the government’s stringent controls.

If the zero-tolerance campaign works, it would mark a victory for President Xi Jinping’s approach in a year when he is expected to secure a precedent-breaking third leadership term.

Shanghai officials did not discuss the milestone at their daily news conference on the numbers for Friday, but Chinese social media cheered, with the topic “Shanghai sees zero-COVID transmission at the community level” receiving more than 190,000 views on Saturday morning on the Weibo (NASDAQ:) platform.

“Shanghai has finally reached zero at the community level!!! May Shanghai wake up as soon as possible!!,” said one post. “There is hope that we can be released after the May holiday,” said another.

But some cast doubt over the Shanghai milestone, noting that most of the city’s residents were locked in some form of quarantine.

In practice, many of the remaining residents in low-risk prevention areas are still not allowed to leave their compounds.

“The city’s epidemic and prevention control is currently still at a critical state, and the trend is still that people need to strengthen controls,” said Zhao Dandan, deputy director of Shanghai’s health commission. “Let us all hold fast to this hard-won level of defence we have reached.”

The battle to curb the highly transmissible Omicron variant in Shanghai has come at a cost for the economy, businesses and people, while delivery companies have been overwhelmed and logistic chains gummed up by the restrictions.

China’s factory activity in April shrank at the fastest in 26 months to the lowest since the early months of the pandemic, first detected in central China, as lockdowns halted industrial production and disrupted supply chains. The data released on Saturday raised fears of a sharp slowdown in the second quarter that will weigh on global growth.

Shanghai officials, who say they are eager for factories to get back to work, said more than 80% of 666 prioritised companies had restarted production and that they had drawn up a second list of 1,188 firms.

Infections are easing as the world’s most populous country enters the Labour Day break, which runs through Wednesday, traditionally one of China’s busiest tourist seasons, but which is taking a huge hit this year due to the virus.

Some observers say authorities have been less strict in making people take tests in recent days.

In Beijing, authorities are racing to detect COVID cases and isolate close contacts with infected people. The local government said residents must provide nucleic-acid test results within seven days before going to public places or taking public transport, effective after the holiday break.

Compounding frustrations in both cities, officials have provided no timeline or strategy for returning to some semblance of normality.

In response to COVID and other headwinds, China will step up policy support for the economy, a top decision-making body of the Communist Party said on Friday, lifting stocks from two-year lows.

Shanghai reported 47 COVID-19 deaths for Friday, down from 52 a day earlier.

Some have questioned the fatality rate, as many residents have said relatives or friends have died after catching coronavirus as early as March.