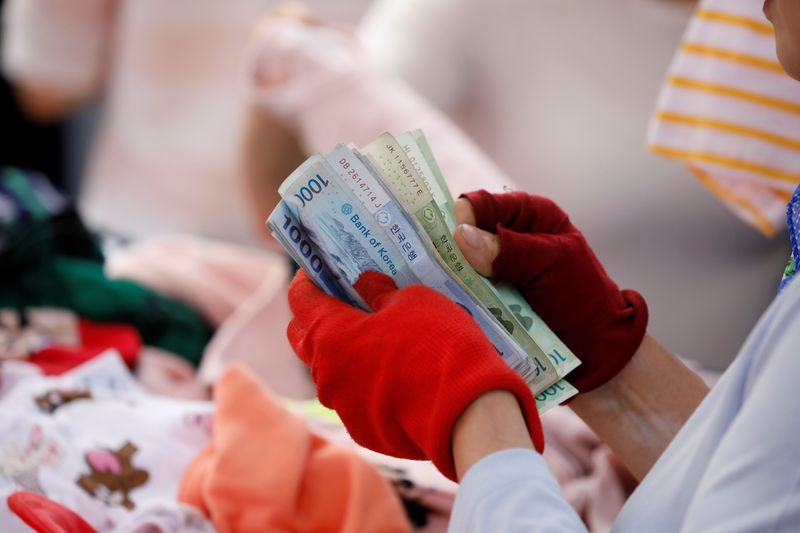 © Reuters. FILE PHOTO: A street vendor counts his money at the Namdaemun Market in Seoul, South Korea, May 30, 2017. REUTERS/Kim Hong-Ji

By Jihoon Lee and Choonsik Yoo

SEOUL (Reuters) – South Korea’s consumer prices in April rose much faster than expected and at their quickest pace in 13-and-a-half years over a year earlier, led by a surge in energy and some food prices, government data showed on Tuesday.

The Statistics Korea data showed the consumer price index (CPI) rose 4.8% in April from a year before, speeding up from a 4.1% rise in the previous month and far faster than a 4.4% rise tipped in a Reuters survey.

It even exceeded the highest forecast among the 11 economists in the survey and marked the fastest annual growth since October 2008, while standing above the central bank’s 2% target for a 13th consecutive month.

“It’s faster than we expected and indicates the timing will also come later than we though when the inflation begins to slow down and stabilise,” said Stephen Lee, senior economist at Meritz Securities. “It won’t change the interest rate prospects but it’s clearly a surprise to the markets.”

The core inflation, measuring price growth excluding energy and foods, sped up modestly to 3.1% on a year-on-year basis in April from 2.9% in March and marked their highest since May 2009.

South Korea’s central bank last month raised its benchmark interest rate by 25 basis points to 1.50% in a surprise move as it ramped up the fight against rampant inflation.

It marked the fourth increase of the Bank of Korea’s base rate since it kicked off a policy tightening cycle in August last year as one of the first central banks in high-income countries to do so.