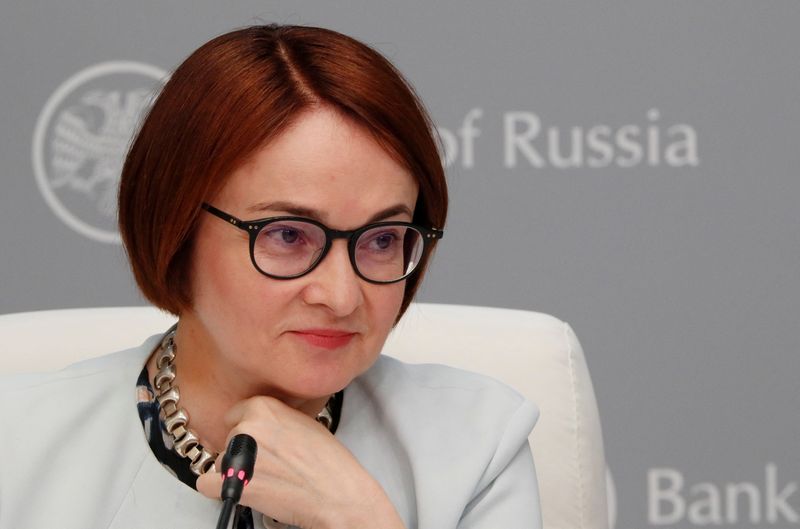 (Reuters) – Russian central bank governor Elvira Nabiullina will not take questions from journalists after explaining this month’s monetary policy decision in an online presentation on Friday, the central bank said on Monday.

Nabiullina usually holds a news conference broadcast in Russian and English after the bank announces its interest rate decisions, although she did not do so when the key rate was more than doubled in an emergency move on Feb. 28.

The hike to 20% from 9.5% came as the rouble tumbled to record lows following the imposition of sanctions by Western countries on Russia after its invasion of Ukraine.

It was accompanied by other measures including some capital controls and an instruction to export-focused companies to sell 80% of their foreign currency revenues.

Nabiullina read out a statement explaining the moves in an online broadcast.

The central bank has yet to update its forecasts for inflation and growth in light of the Ukraine conflict and sanctions that have isolated Russia economically.

Moscow calls its actions in Ukraine a “special operation” to demilitarise and “denazify” its neighbour. Ukraine and Western allies call this a baseless pretext for a war of choice.

An independent survey of analysts requested by the central bank last week forecast inflation of 20% and an 8% economic contraction this year and predicted the key interest rate would average 18.9% in 2022.

Nabiullina, 58, has led the central bank since 2013, a year before Russia annexed the Crimean peninsula from Ukraine, triggering a first wave of western sanctions.

Her current term expires on June 24 and the rules say President Vladimir Putin must either nominate Nabiullina again or propose another candidate to the lower house of parliament no later than March 24.

The central bank is due to release its monthly key rate statement at 1030 GMT on March 18, followed by Nabiullina’s statement at 1200 GMT.