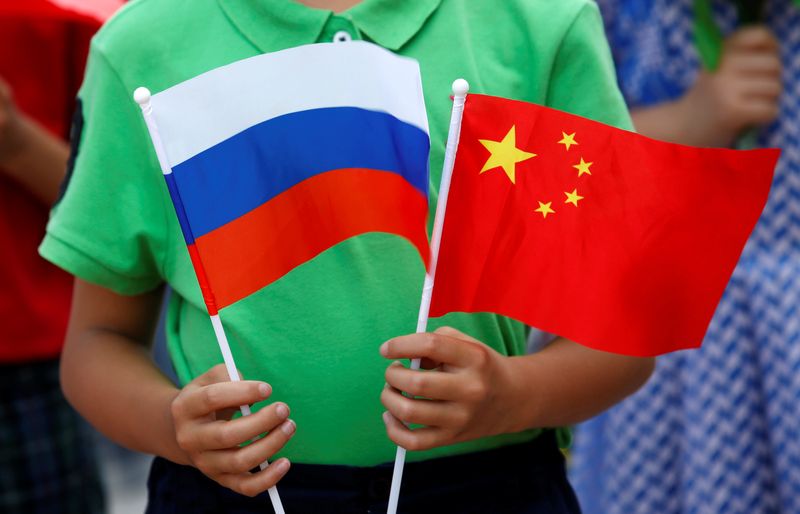 © Reuters. FILE PHOTO: A child holds the national flags of Russia and China prior to a welcoming ceremony for Russian President Vladimir Putin outside the Great Hall of the People in Beijing, China, June 25, 2016. REUTERS/Kim Kyung-Hoon

LONDON (Reuters) – Russia said on Sunday that it was counting on China to help it withstand the blow to its economy from Western sanctions over the war in Ukraine, but the United States warned Beijing not to provide that lifeline.

Russian Finance Minister Anton Siluanov said sanctions had deprived Moscow of access to $300 billion of its $640 billion in gold and foreign exchange reserves, and added that there was pressure on Beijing to shut off more.

“We have part of our gold and foreign exchange reserves in the Chinese currency, in yuan. And we see what pressure is being exerted by Western countries on China in order to limit mutual trade with China. Of course, there is pressure to limit access to those reserves,” he said.

“But I think that our partnership with China will still allow us to maintain the cooperation that we have achieved, and not only maintain, but also increase it in an environment where Western markets are closing.”

Western countries have imposed unprecedented sanctions on Russia’s corporate and financial system since it invaded Ukraine on Feb. 24 in what it calls a special military operation.

Siluanov’s comments in a TV interview marked the clearest statement yet from Moscow that it will seek help from China to cushion the impact.

But U.S. National Security Adviser Jake Sullivan said Washington was warning China not to provide it.

“We are communicating directly, privately to Beijing, that there will absolutely be consequences for large-scale sanctions, evasion efforts or support to Russia to backfill them,” Sullivan told CNN.

“We will not allow that to go forward and allow there to be a lifeline to Russia from these economic sanctions from any country, anywhere in the world,” added Sullivan, who is due to meet China’s top diplomat Yang Jiechi in Rome on Monday.

Russia and China have tightened cooperation in recent times as both have come under strong Western pressure over human rights and a raft of other issues. Beijing has not condemned Russia’s attack on Ukraine and does not call it an invasion, but it has urged a negotiated solution.

Presidents Vladimir Putin and Xi Jinping met in Beijing on Feb. 4 and announced a strategic partnership they said was aimed at countering the influence of the United States, describing it as a friendship with no limits.

China is Russia’s top export market after the European Union. Russian exports to China were worth $79.3 billion in 2021, with oil and gas accounting for 56% of that, according to China’s customs agency.