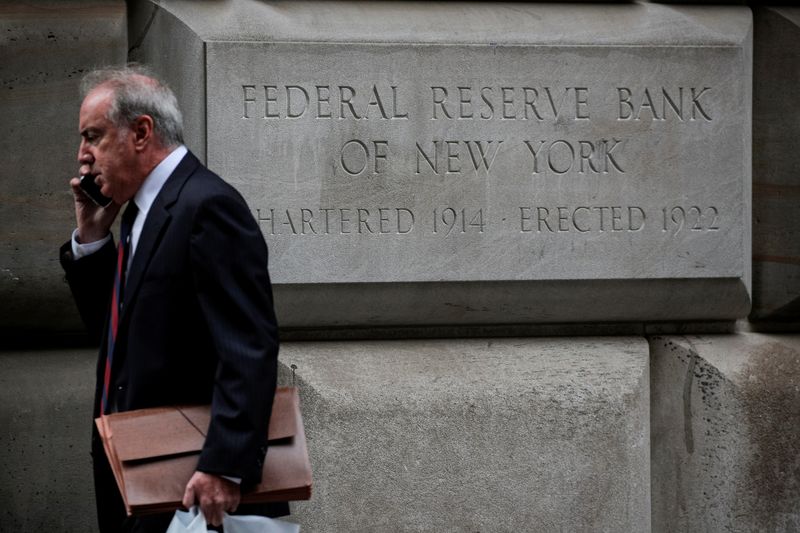 WASHINGTON (Reuters) -The Fed’s stock of Treasury bonds and mortgage backed securities is projected to decline by roughly $2.5 trillion by mid-2025, to about $5.9 trillion, when the central bank’s run-off of assets is likely to be halted to maintain an adequate level of bank reserves, the New York Fed said on Tuesday.

But that run-off will do little to trim what is the most controversial portion of the Fed’s portfolio, the $2.7 trillion in mortgage-backed securities that it currently holds. Under the New York Fed’s projections the portion of assets held in MBS would remain roughly constant through 2025, with the central bank still holding roughly $1 trillion of those securities by 2030.

The Fed wants to shift its holdings out of the mortgage market altogether, and the expected slow run-off of MBS has prompted some policymakers to call for outright sales of those securities.

The New York Fed’s annual report on its open market operations provides a key glimpse of how the Fed’s asset holdings, which ballooned to nearly $9 trillion during the pandemic as it bought assets to stabilize core financial markets, will evolve now that the Fed is letting its balance sheet shrink.

Monthly declines will be about $80 billion through 2024, the New York Fed estimated.

The decline will continue for about three years, the New York Fed said, at which point the Fed’s holdings could be held constant, at an estimated 22% of gross domestic product, then grow again in proportion to the economy.

Reserves required by the banking system are included in that amount, which the New York Fed estimated at around 8% of gross domestic product.

The report also highlighted risks around the Fed’s transition to a smaller balance sheet at a time when interest rates are rising. One of the Fed’s tools for raising short-term market interest rates is to pay more for reserve deposits held by banks at the Fed. Just as those expenses rise, the Fed’s roll-off of its own holdings mean it will be earning less in interest payments from its Treasury bonds and mortgage securities.

Under current projections Fed “net income is projected to decline notably,” the New York Fed said, meaning smaller profits to be turned back to the U.S. Treasury.

If rates rise even faster the Fed could, for a time at least, be operating at a loss, forced in effect to print money to pay its bills and halting remittances to the Treasury altogether. Fed remittances in 2021 were more than $100 billion.

Since the market price of securities falls when yields rise, higher interest rates also mean that the market value of the Fed’s portfolio has fallen, and by next year could on paper be worth about $300 billion less than its face value.

Fed officials have acknowledged that, should they choose to sell MBS in a higher-interest rate environment, they might realize losses. Their Treasury investments, however, are intended to be held until maturity, when the full face value is repaid.