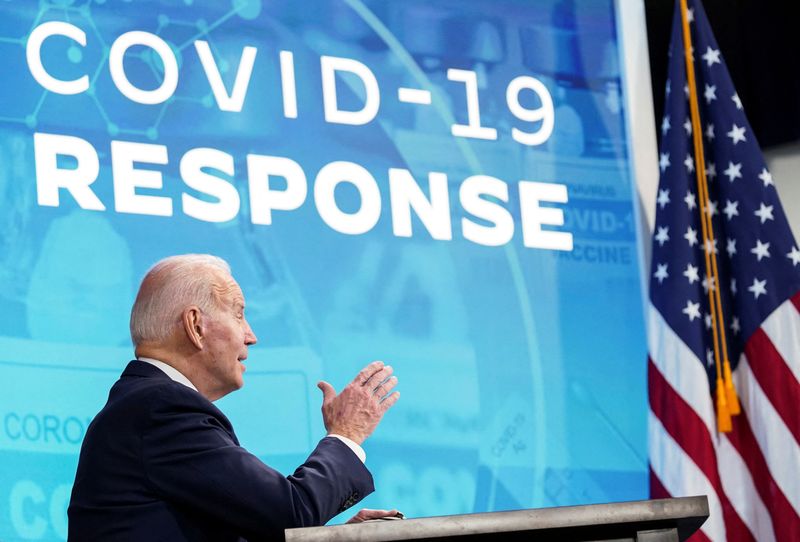 WASHINGTON (Reuters) -Negotiators in Congress have agreed to an additional $10 billion in COVID-19 funding to address U.S. needs but have dropped international aid from the package, two U.S. media outlets said on Monday ahead of lawmakers’ upcoming spring recess.

Lawmakers could not agree on additional money in global aid to address the health crisis, the Washington Post said, citing two people familiar with the deal. Politico and the Wall Street Journal also separately reported the deal.

But U.S. Senate Appropriations Committee Chairman Patrick Leahy said there was no deal yet, a Bloomberg reporter said on Twitter (NYSE:) citing the senator.

The compromise, if passed, would be less than half of the $22.5 billion initially sought by U.S. President Joe Biden to combat COVID, prepare for future variants and shore up the nation’s pandemic infrastructure.

Congressional representatives could not immediately be reached for comment on the reports. The White House said it would have a comment if a deal emerged.

Biden has said more funding is needed as the world continues to fight COVID in the pandemic’s third year. While U.S. officials have said they do not expect a surge from the latest BA.2 Omicron variant, they have pointed to the need to continue to make vaccines available at not cost and to boost surveillance and testing.

U.S. regulators last week approved a second booster shot for older and immunocompromised Americans, but administration officials have said without more funding from Congress money will run out for the free shots.

“The consequences of inaction are severe,” Biden warned lawmakers at a White House event last week.

Lawmakers had been weighing a $15 billion measure that included $5 billion in international aid. Health experts have said without full global immunization efforts the virus can continue to mutate, increasing the risk of infection and vaccine evasion.

Members of Congress negotiating the package, however, could not agree on how to pay for the global response, the Post said.

Congressional Democrats, who narrowly control both the House and the Senate, have vowed to tackle COVID aid separately after nixing it from the recent larger government funding bill. Lawmakers are set to leave on Friday for a two-week recess.