EUR/USD Price Analysis: Traders looking for a catalyst from the Fed, bulls on a knife’s edge

EUR/USD Price Analysis: Traders looking for a catalyst from the Fed, bulls on a knife’s edge

The US dollar is higher vs. major trading partners early Wednesday ahead of Federal Reserve minutes that are released at the top of the hour. The board members that have spoken this week have been less hawkish if not slightly dovish in terms of how fast rates should be increased later in the year. However, an increase of 50 basis points remains the expected outcome at the June 14-15 meeting and the minutes will be important for central bank observers seeking confirmation of that as well as an insight into subsequent meetings.

Nevertheless, the dovishness from some officials,  coupled with European Central Bank President Christine Lagarde suggesting in a blog that the first ECB rate hike could occur in July, has pulled the rug from under the US dollar bulls and enabled the euro to correct in a significant manner toward a key zone on the weekly chart as per the prior analysis, EUR/USD Price Analysis: Bulls charge towards a critical weekly 50% mean reversion mile-stone, and as follows:

The 4-hour time frame confirms the prior analysis on the daily chart as follows where the W-formation on the weekly chart was noted as a potential meanwhile bearish factor:

However, at this juncture, the weekly W-formation should be noted: 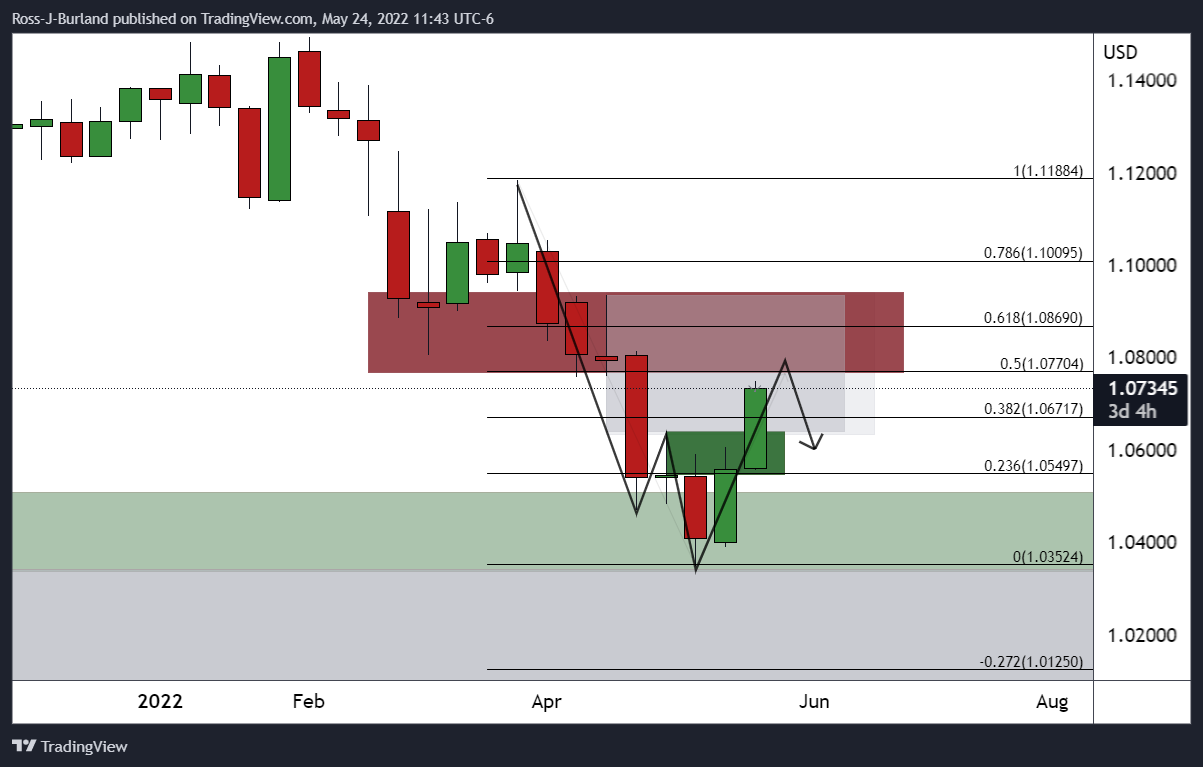 ”This is a reversion pattern and the price would be expected to revisit the neckline in due course. In the meantime, the daily impulse could be due for a meanwhile correction also: 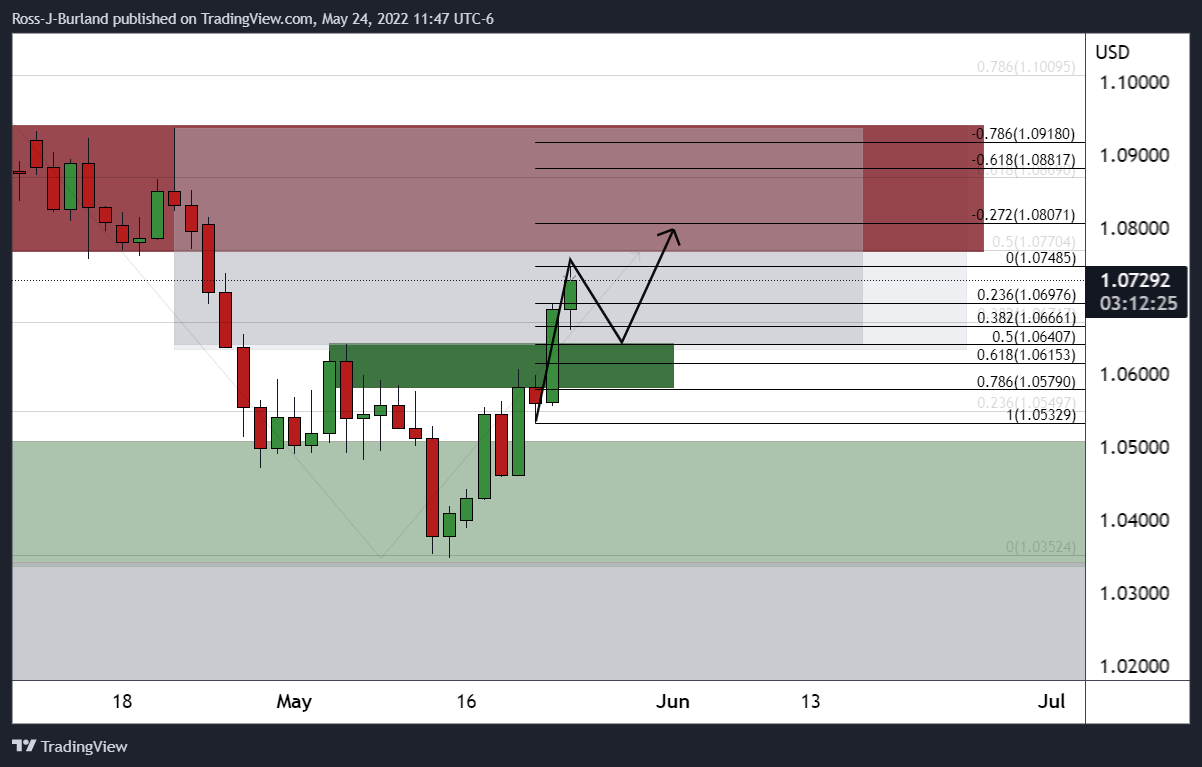 The move to the downside was projected from a 15-min time frame perspective as follows: 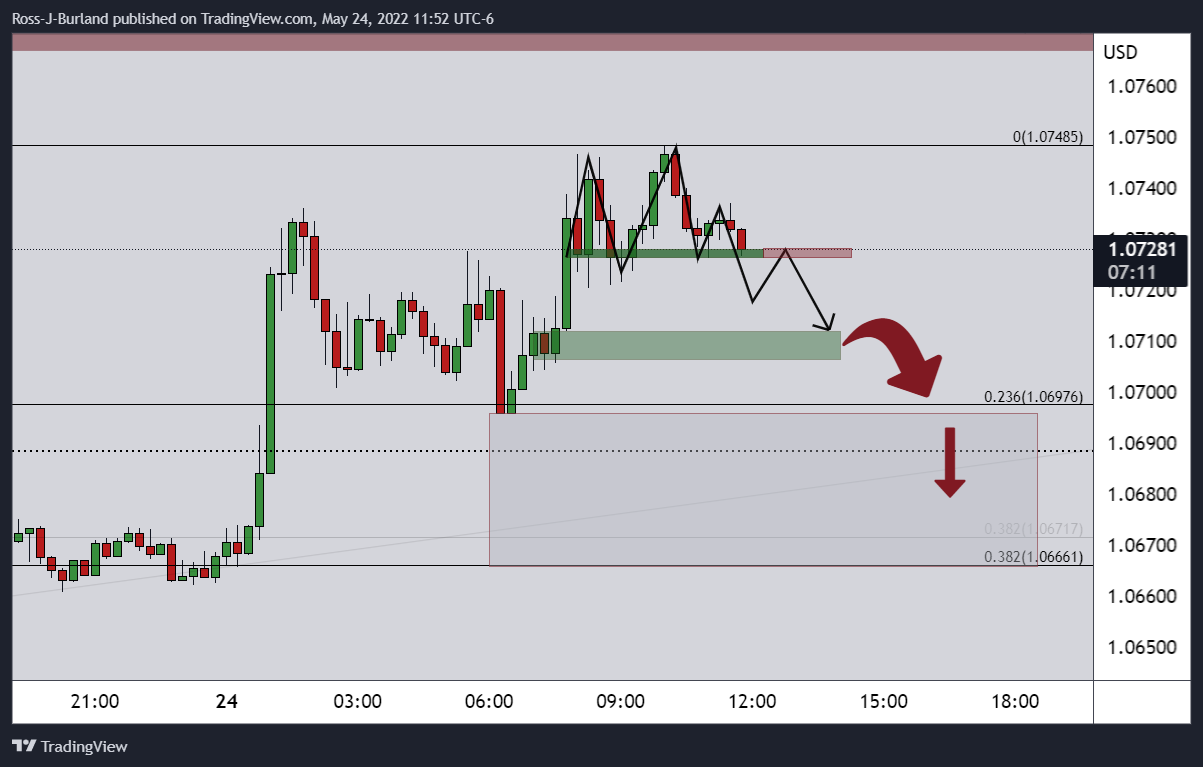 ”The bearish head and shoulders are a topping pattern that currently features in the 15-min time frame. A break of the neckline near 1.0725 could spell trouble for the committed bulls. A break of 1.0705 will likely open the way for further supply to mitigate the price imbalance towards a 38.2% Fibonacci retracement of the daily bullish breakout impulse near 1.0665 that guards a 50% mean reversion to 1.0640.”

For the minutes and sessions ahead, the pair could be based here and result in a higher correction from support:

However, anything uber hawkish is likely to support the greenback and potentially send the euro below 1.0640 towards a daily 61.8% ratio down at 1.0615 or deeper into the support area and nearer to a 78.6% ratio near 1.0580 in due course: