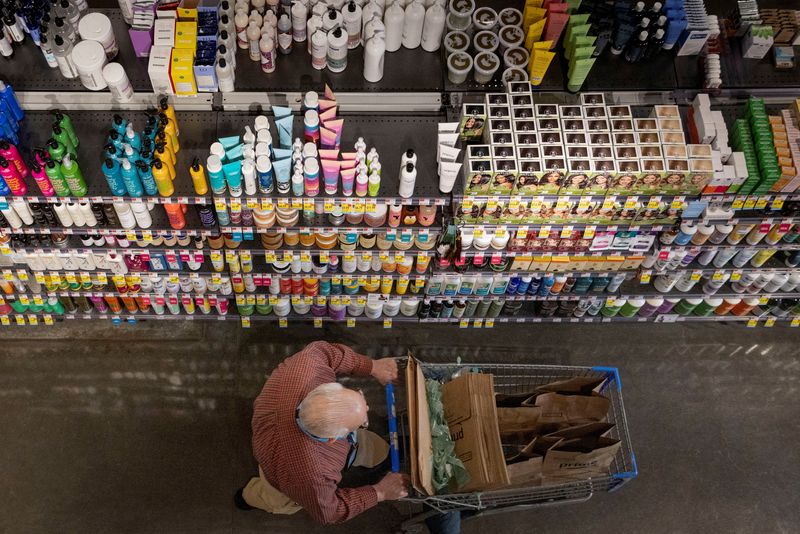 By David Randall and Davide Barbuscia

NEW YORK (Reuters) -Blistering inflation is threatening to reignite twin declines in U.S. stocks and bonds, leaving investors with few places to hide from a Federal Reserve that appears headed for its most aggressive policy tightening in decades.

Friday gave a hint of what investors may see in coming weeks. The benchmark fell nearly 3% while yields on the benchmark 10-year Treasury hit their highest level since early May after stronger-than-expected inflation data ramped up forecasts for more aggressive Fed rate hikes later this year. Bond yields move inversely to prices.

“Today, the inflation data was disappointing. Many hopes for a peak are now dashed,” said Ryan Detrick, chief market strategist at LPL Financial (NASDAQ:). “The fears over inflation and the potential impact of profits in Corporate America are adding to the worries for investors here.”

Stocks and bonds have fallen in lockstep for most of the year as tighter Fed policy lifted yields and dried up risk appetite, pummeling investors who had counted on a mix of the two assets to buffer declines in their portfolios.

Those moves partially reversed over the last few weeks on hopes that a potential peak in inflation would allow the Fed to turn less aggressive later this year.

But with markets now betting policymakers will hike rates by at least 50 basis points in their next three meetings, expectations of a less hawkish Fed are fading and investors believe more declines are on the way.

“Given that price pressures in the U.S. show little sign of easing, we doubt that the Fed will take its foot off the brakes anytime soon,” analysts at Capital Economics wrote on Friday. “We therefore suspect that more pain is yet in store for U.S. asset markets, with Treasury yields rising further and the stock market remaining under pressure.”

The S&P is down 18.2% year-to-date, again approaching the 20% decline from record highs that many investors consider a bear market. Yields on 10-year U.S. government bonds – a benchmark for mortgage rates and other financial instruments – have more than doubled.

Phil Orlando, chief equity market strategist at Federated Hermes (NYSE:), has beefed up cash positions in the portfolios he manages to 6% – the largest allocation he has ever held – while cutting holdings in bonds. In equity markets, he is overweight the sectors expected to benefit from rising prices, such as energy.

“You have a very difficult picture for financial markets for the next several months,” he said. “Investors (have) to accept that the consensus view was wrong and inflation is still a problem.”

Orlando sees fears of stagflation – a period of slowing growth and high inflation – as a key market driver.

Overall, 77% of fund managers expect stagflation in the global economy over the next 12 months, the highest level since August 2008, according to a survey by BoFA Global Research taken before Friday’s inflation data.

Friday’s white-hot print – which showed consumer prices rising 8.6% in May – is pushing some Wall Street banks to raise forecasts for how much the Fed will need to hike rates to stanch inflation in coming months, potentially maximizing the pain for investors.

Barclays (LON:) now sees policymakers delivering their first 75- basis-point increase in 28 years when they meet next week, while Goldman Sachs (NYSE:) strategists forecast 50-basis-point hikes at each of the next three meetings.

Prices of Fed funds futures contracts on Friday reflected better-than-even odds of a 75-basis-point rate hike by July, with a one-in-five chance of that occurring next week – up from one-in-20 before the inflation report. The Fed has already raised rates by 75 basis points this year.[FEDWATCH]

Pramod Atluri, fixed income portfolio manager at Capital Group and principal investment officer on Bond Fund of America (BFA), is among the bond investors who have dialed back duration – which is a portfolio sensitivity to changes in interest rates – over the last few weeks.

“I thought there was a reasonable chance that inflation had peaked at 8.5%, and we would be on a steady downward trend through the rest of this year. And that has not played out,” Atluri said.