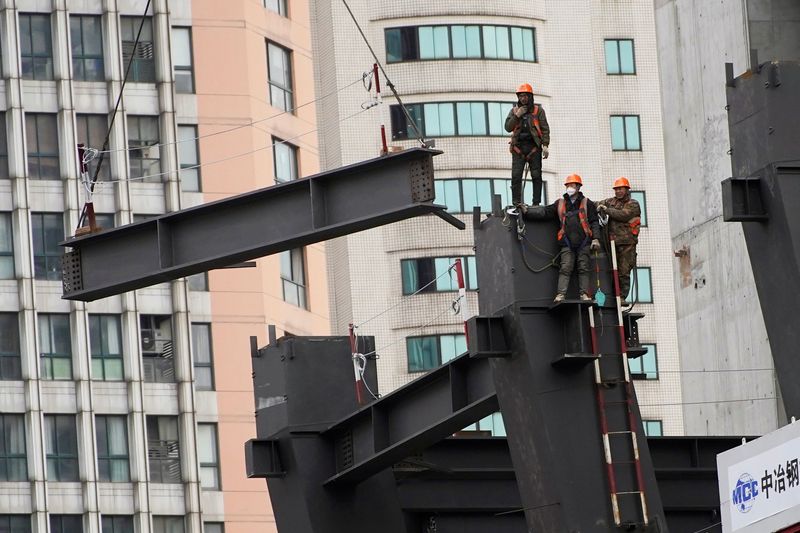 BEIJING (Reuters) – China is expected to report a sharp deterioration in economic activity in March as COVID-19 outbreaks and lockdowns hit consumers and factories, although first-quarter growth may have perked up due to a strong start early in the year.

Data on Monday is expected to show gross domestic product (GDP) grew 4.4 in January-March from a year earlier, a Reuters poll showed, outpacing the fourth-quarter’s 4.0% pace due to a surprisingly solid start in the first two months.

But on a quarterly basis, GDP growth is forecast to fall to 0.6% in the first quarter from 1.6% in October-December, the poll showed, pointing to cooling momentum.

Separate data on March activity, especially retail sales, is likely to show an even sharper slowdown, analysts say, hit hard by China’s strict efforts to contain its biggest COVID outbreak since the coronavirus was first discovered in the city of Wuhan in late 2019.

Analysts say April readings will likely be worse, with lockdowns in commercial centre Shanghai and elsewhere dragging on. Some economists say the risks of a recession are rising.

The government is due to release the Q1 and March figures on Monday at 0200 GMT, with investor speculation mounting over whether there will be more moves to stimulate the economy.

Late on Friday, China’s central bank said it would cut the amount of cash that banks must hold as reserves for the first time this year, releasing about 530 billion yuan ($83.25 billion) in long-term liquidity.

The move was largely expected after the State Council, or cabinet, said on Wednesday that monetary policy tools – including cuts in banks’ reserve requirement ratios (RRRs) – should be used in a timely way.

Policymakers need to ensure nothing goes wrong before a twice-a-decade meeting of the ruling Communist Party in autumn, when President Xi Jinping is almost certain to secure a precedent-breaking third term as leader, policy insiders said.

But Beijing’s strict zero tolerance policy on COVID-19 is taking an increasing toll on the world’s second-largest economy, and is starting to disrupt supply chains globally ranging from cars to iPhones.

“In the run-up to the Party Congress, we think the central bank will prioritise growth, especially as the COVID battle drags on and housing markets fail to rebound,” analysts at Barclays (LON:) said in a note.

Retail sales, a gauge of consumption which has been lagging since COVID-19 first hit, likely shrank 1.6% in March from a year earlier. That would be the worst showing since June 2020, reversing a 6.7% rise in the first two months, the poll showed.

The Reuters poll forecast China’s growth to slow to 5.0% in 2022, suggesting the government faces an uphill battle in hitting this year’s target of around 5.5%.

Barclays estimates that the second-quarter GDP growth could dip to 3%, dragging 2022 growth to 4.2%, if Shanghai’s extended lockdown were to last for one month and partial lockdowns in the rest of the country remained in place for two months.

The government has unveiled more fiscal stimulus this year, including stepping up local bond issuance to fund infrastructure projects, and cutting taxes for businesses.

But analysts are not sure if rate cuts would do much to arrest the economic slump in the near term, as factories and businesses struggle and consumers remain cautious about spending. More aggressive easing could also trigger capital outflows, putting more pressure on Chinese financial markets.

“I don’t think this RRR cut (on Friday) matters that much for the economy at this stage,” said Zhiwei Zhang, chief economist at Pinpoint Asset Management, noting it was less than markets had expected.

“The main challenge the economy faces is the Omicron outbreaks and the lockdown policies that restrict mobility. More liquidity may help on the margin, but it doesn’t address the root of the problem. Manufacturers face the daunting risk of supply chain disruptions.

“Unless we see effective policies to address the mobility problem, the economy will slow. I expect GDP growth in Q2 to turn negative.”