Cardano has retreated by 90% from its all-time highs – Can it turn around?

Cardano has retreated by 90% from its all-time highs – Can it turn around?

Cardano (ADA) has officially entered the bear market. The coin has been on a downward retreat for the last few months. Although there have been cases where it has rallied slightly, overall, the price action has remained quite suppressed. Here are some key facts: 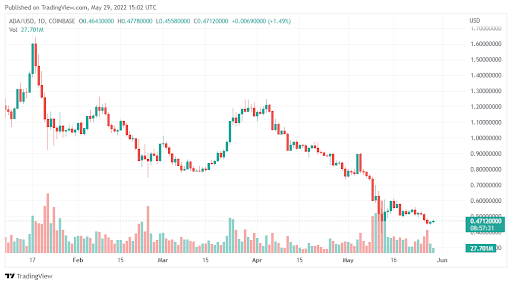 Cardano: How feasible is $10

For ADA to hit $10 by the end of the year, the coin will need to grow by 20x in six months. While this may seem like a pipe dream owing to the slow sentiment in the market, it’s actually not unprecedented. 20x growth in crypto is after all something quite common.

However, things will not be that simple for ADA bulls. But, it is clear that the coin is heavily undervalued. For example, even though Cardano continues to report significant growth in its ecosystem, the coin has failed in the past few weeks to cross above $1. Besides, the general weakness in the market appears to have taken its toll on many large-cap coins.

As soon as sentiment starts to turn around, we expect ADA to fully rally. It is likely that a change in investor sentiment may come in the second half of 2022. Even if ADA doesn’t hit $10, the possibility of 10x growth is still high.

Why you must buy Cardano now

The thing about Cardano is that it still has so much to offer. The coin will probably take months to achieve its true potential.

But if you don’t mind holding it for long, then returns in a year or so could be massive. The $0.4 price right now is probably the cheapest ADA will get.