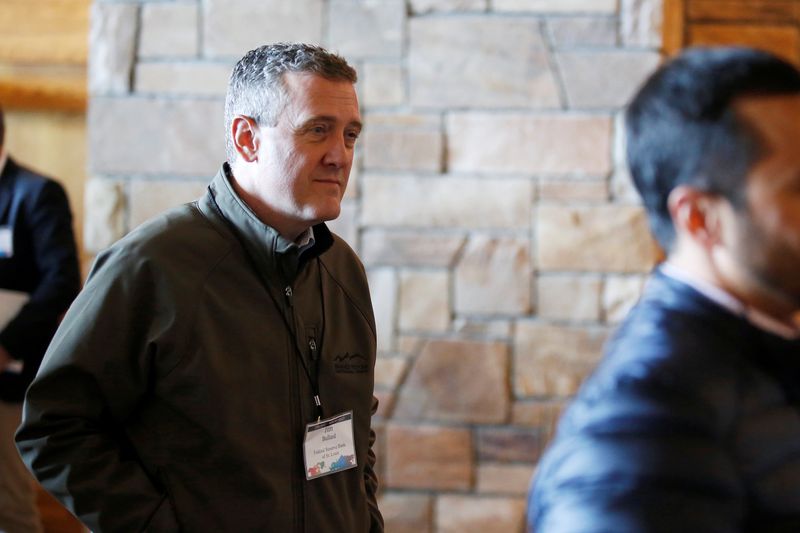 (Reuters) – The Fed is behind in its fight against inflation and needs to raise the federal funds rate another 3 percentage points by year’s end, St. Louis Fed president James Bullard said on Thursday, a pace that implies half-point increases at each of the Fed’s six remaining meetings this year.

“I would like to get there in the second half of this year…We have to move,” to get ahead of inflation running at triple the Fed’s 2% target, Bullard said. “We are talking about bigger moves than we have made in a long time.”

The pace described is slightly quicker than the one Bullard offered at the March Fed meeting, which saw the federal funds rate reach 3.25% by year’s end.

Minutes of that session showed “many” of Bullard’s colleagues prepared for “one or more” half-point increases at upcoming meetings.

But the path outlined by Bullard, now perhaps the most aggressive policymaker in his reaction to inflation, is beyond even what markets currently anticipate from the central bank. Trading in federal funds future contracts show investors expect the Fed to raise its policy rate to a range of between 2.5% and 2.75% by year’s end, according to data compiled by the CME Group (NASDAQ:).

Even a “generous” application of standard monetary policy rules, Bullard said, showed the Fed “behind the curve” in fighting inflation, even after accounting for the financial “tightening” that already has taken place in markets based on investors’ expectations the Fed will act more aggressively.

Even though the Fed has only raised its policy rate a quarter of a percentage point, to a range of between 0.25% and 0.5%, the 2-year Treasury yield has risen from around 1.45% on March 1 to 2.45% on Thursday morning, and the interest rate on a 30-year home mortgage is approaching 5% versus recent lows below 3%.

The Fed next meets on May 3-4, and a half point increase at that session is widely expected. Inflation data to be released next week is expected to show consumer prices in March rose at a torrid pace, perhaps north of 8% or higher, amid a spike in gasoline prices due to the outbreak of war in Ukraine.

But some Fed officials have pointed to the second half of 2022 as a time to assess just how the Fed’s relatively swift shift in monetary policy is affecting the economy. Along with raising the target interest rate, the Fed is likely in May to begin reducing its holdings of Treasury bonds and mortgage backed securities by up to $95 billion a month, a move that may further increase key long-term interest rates.

Some policymakers have suggested the additional tightening coming from the Fed’s balance sheet decisions might allow slower or fewer increases in the federal funds rate.

Changes to the balance sheet, however, “have already been absorbed by markets,” Bullard said, and shouldn’t influence the Fed’s rate decisions.

Likewise he said that “as it stands right now” the war in Ukraine should not influence the Fed’s inflation fight.