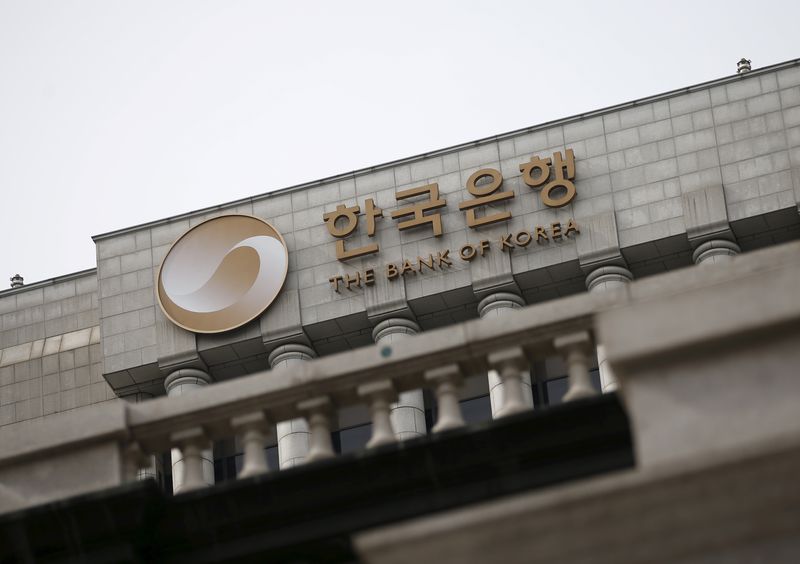 © Reuters. FILE PHOTO: The logo of the Bank of Korea is seen on the top of its building in Seoul, South Korea, March 8, 2016. REUTERS/Kim Hong-Ji

Governor Lee Ju-yeol said in a speech wrapping up his eight-year term at the Bank of Korea that as high inflation was expected to continue “for a considerable period” and there was a need to reduce financial imbalances, “it is necessary to continue reducing the degree of monetary policy easing”.

Lee, who has presided over 76 rate decision meetings in total, ends his term on March 31 and will pass on his duties to Rhee Chang-yong, a veteran technocrat at the International Monetary Fund.

The BOK held its base rate unchanged at 1.25% at its February meeting, after back-to-back hikes on surging coronavirus cases and escalating tensions in Ukraine.

Even then, Lee said expectations of more rate hikes by the bank to about 1.75% or 2.00% were “reasonable”, adding that there was a stronger need to respond with policy actions to stabilise prices.

In February, the bank sharply raised its inflation forecasts to 3.1% from 2.0% for this year, while keeping its growth forecast unchanged at 3.0%.

Lee, however, said on Wednesday the BOK’s February forecast did not include the Russian invasion of Ukraine and signalled a revision may be made later.

“Russia’s invasion of Ukraine came soon after (our last meeting) and the economic conditions have worsened since then,” Lee told reporters.

“We will still have to monitor the development of Russia-Ukraine conflicts and its impact … but it is true that we are concerning that the Russia-Ukraine war will bring much higher inflationary pressure and add strains on growth,” Lee added.

Russia calls its actions in Ukraine a “special military operation”.