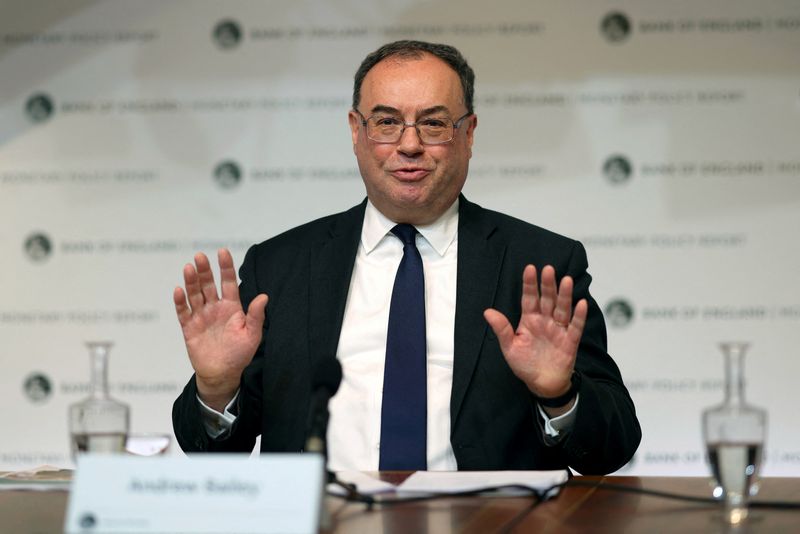 © Reuters. FILE PHOTO: Governor of the Bank of England Andrew Bailey speaks during a news conference at Bank of England in London, Britain February 3, 2022. Dan Kitwood/Pool via REUTERS

By David Milliken and Andy Bruce

LONDON (Reuters) -Bank of England Governor Andrew Bailey said on Wednesday there were clear risks that inflation could again overshoot the central bank’s forecasts but markets should not get carried away about the likely scale of interest rate rises.

The BoE forecasts inflation will peak at a 30-year high of around 7.25% in April when a 54% rise in regulated household energy bills takes effect.

Financial markets expect the BoE to raise rates to nearly 2% this year from 0.5% now.

Bailey said there were clear upside risks to the BoE’s central inflation forecast if the historic surge in energy prices led to higher wage deals and businesses passing on the costs to consumers.

“It’s not just wage setting, it’s also price setting … it’s both,” Bailey told lawmakers. “There is very clearly an upside risk there. The upside risk … comes through from the second-round effects.”

Bailey sought to defend earlier remarks – widely criticised by trade unions and politicians – in which he urged pay restraint to avoid a cycle of rising prices and wages.

A combination of higher wages and higher inflation would favour workers with greater bargaining power who tended to be better off, Bailey said.

“This real thing that worries me here is that it’s those with the least bargaining power in the labour market who lose out in this situation,” he said.

Nonetheless, lawmakers on the House of Commons’ Treasury Committee challenged Bailey over whether he truly understood the scale of the challenge faced by the lowest-paid workers.

Angela Eagle from the opposition Labour Party asked him to state how much he earned. Bailey he said he could not remember precisely before confirming it was 575,538 pounds ($783,422) a year including pension contributions.

The BoE became the world’s first major central bank to raise borrowing costs after the coronavirus pandemic in December and it raised its benchmark Bank Rate again this month to 0.5% from 0.25%. Four of its nine monetary policymakers voted for an increase to 0.75%.

Investors are fully pricing in another 25 basis-point rate hike next month, followed by another in May.

Deputy Governor Ben Broadbent said the surge in energy prices was likely to be twice as big in 2022 as in any year in the 1970s, when high inflation plagued many economies.

“This is the most challenging period for monetary policy since inflation targeting began in 1992,” Broadbent said.

Silvana Tenreyro, an external Monetary Policy Committee member, said the BoE’s forecasts showed inflation in three years’ time would be only just above its 2% target if rates did not rise, implying only “really modest” tightening was needed.

Bailey said: “It is a message to markets not to get carried away.”

He and BoE Chief Economist Huw Pill have previously mooted scaling back guidance to markets.

However, the International Monetary Fund on Wednesday warned the BoE that clear communication was key to avoid a repeat of November’s turmoil when markets believed the BoE had signalled a rate hike, only for rates to stay on hold.

Bailey said the MPC’s split in February over how much rates needed to rise should not be read as signalling a big disagreement on how high they would need to go in total.

MPC member Jonathan Haskel, part of the minority that voted for a rise in Bank Rate to 0.75%, said it was “a very, very finely balanced decision”.