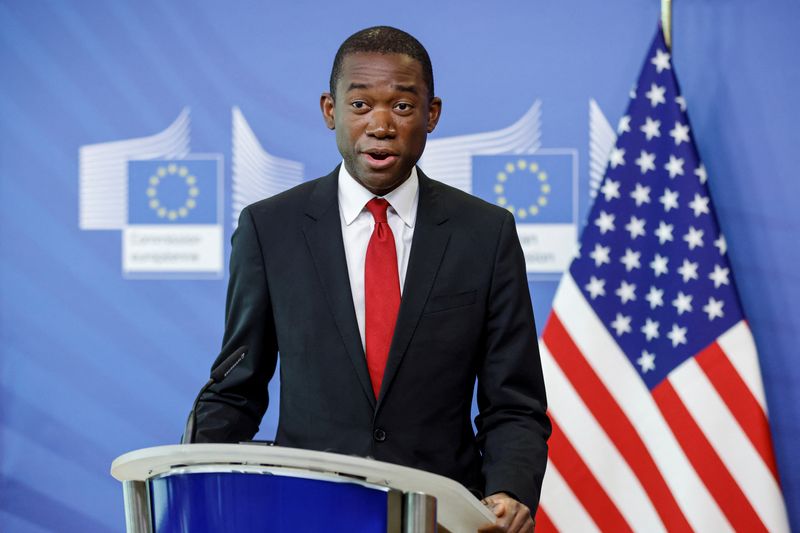 WASHINGTON (Reuters) -U.S. Deputy Treasury Secretary Wally Adeyemo said on Tuesday that the Biden administration is considering whether to cut some tariffs on Chinese goods, but needs to balance short-term price reduction goals against the longer-term need to address unfair competition from China.

“We’re actively considering what we do with regard to those tariffs,” Adeyemo told CNN in a live interview. “I think the important thing for every American to know is that the president is committed to doing everything we can to bring down costs in a sustainable way.”

Adeyemo’s comments come amid an intense debate within the Biden administration over the merits of reducing some of the Section 301 tariffs on hundreds of billions of dollars worth of Chinese imports as a way to ease high inflation. The punitive duties of up to 25% were imposed by the Trump administration in 2018 and 2019 amid a bitter trade war between the world’s two largest economies.

U.S. Treasury Secretary Janet Yellen has advocated cutting some “non-strategic” tariffs on consumer goods, while U.S. Trade Representative Katherine Tai has argued that the tariffs should be considered as part of an overall strategy to push China to meet its trade commitments and end abusive economic practices..

President Joe Biden said last week he is weighing a move to cut some tariffs on Chinese imports.

Later on Tuesday, Biden, Yellen and other administration officials are due to meet with Federal Reserve Chair Jerome Powell to discuss U.S. inflation, which has recently hit 40-year highs and clouds Democrats’ prospects in mid-term congressional elections this year.

Adeyemo said that the Biden administration would do all it can to bring down inflation, including more energy production and reducing federal deficits. “And we’re going to give the Fed the room it needs to make sure that it brings down inflation over time.”

He said the tariffs on Chinese goods were imposed to try to create a level playing field for American firms dealing with unfair competition from China, “and we’re considering how we use tariffs as a tool to do just that.”

The tariff decisions will be influenced by whether the duties put American firms and workers “in a better position to be able to sell American goods around the world going forward.”