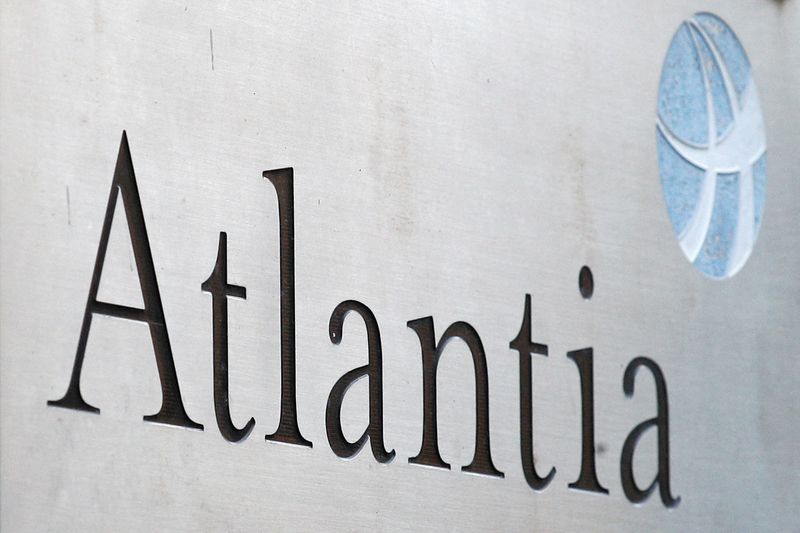 © Reuters. FILE PHOTO: The logo of an infrastructure group Atlantia is seen outside their headquarters, in Rome, Italy October 5, 2020. REUTERS/Guglielmo Mangiapane/File Photo

MILAN (Reuters) -Shares in Atlantia surged almost 9% on Wednesday after a Bloomberg News report that Spanish tycoon Florentino Perez was weighing an offer for the Italian roads and airports group in which the Benetton family is a major investor.

Any bid for Atlantia, which has a market capitalisation of more than 15 billion euros ($16.4 billion), would need the backing of Edizione, the holding company of the Benetton family, which recently increased its stake in the group to 33%.

Bloomberg said that Perez, the biggest shareholder in Spanish builder ACS and also its chairman, was working with advisers to study the potential bid, but there was no certainty whether he would pursue it.

While Perez, also known as president of Real Madrid soccer club, is said to seek to team up with the Benetton family on a deal for Atlantia, he may also consider a hostile bid, the report said.

Atlantia has not convened a board meeting since early March, a source in Italy said, suggesting there was nothing concrete so far about any potential offer.

Alessandro Benetton was appointed chairman of Edizione this year, tightening the family’s grip on its investments, including at Atlantia. Edizione said at the time it deemed its investment in Atlantia strategic.

The stock closed up 2.5% after earlier rising as much as 8.95%, hitting the highest level since February 2020.

Perez and the Benettons are already linked through their joint ownership of Spanish highway operator Abertis.

Perez’s ACS, which itself has a market capitalisation of 7.2 billion euros, has been Atlantia’s partner in Abertis since the two groups’ joint acquisition of the company in 2017.

As well as motorways, Atlantia also operates airports in Rome and southern France and is investing in technology to help regulate traffic flows.

Through ACS, Perez previously pursued a bid for Atlantia’s motorway unit Autostrade per l’Italia but did not manage to secure the backing of the Italian government to go ahead with a binding offer.

Atlantia eventually sold the unit, the focal point of a dispute with the government following a deadly collapse of a bridge in 2018, to Italian state lender CDP and allies.

Atlantia will pocket around 8 billion euros from the deal when it closes later this year, helping it to cut a debt pile that stood at 30 billion euros at the end of 2021.