Remember the old game show “Let’s Make a Deal”? It was originally hosted by the recently deceased Monty Hall, and its current iteration is hosted by comedian Wayne Brady. Contestants can choose from one of three doors, one of which usually has a nice prize behind it — but at least one door also typically hides a total dud.

Choosing between Johnson & Johnson (NYSE: JNJ) , Pfizer (NYSE: PFE) , and Gilead Sciences (NASDAQ: GILD) isn’t easy, but it’s not nearly as bad as the game show. None of these three big drug stocks are duds. And investors can see what each has to offer without relying on blind luck. Which is the better buy? Here’s how J&J, Pfizer, and Gilead compare in three key areas. 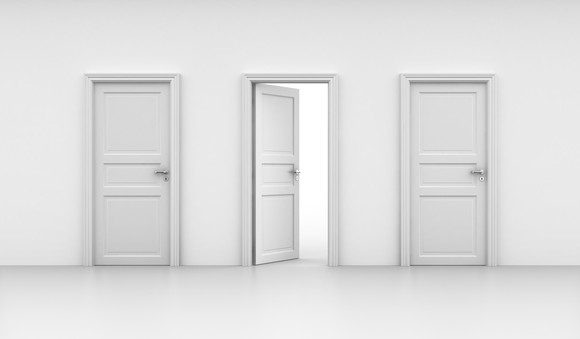 If we relied on Wall Street projections, Johnson & Johnson would win. Analysts think J&J will achieve average annual earnings growth of more than 6% over the next five years, compared to estimates of a little under 6% growth for Pfizer and an 8% decrease annually in earnings for Gilead.

All three companies face challenges for current products. Gilead has the most severe problem, with plunging sales of its hepatitis C virus (HCV) drugs. J&J, though, must deal with competition for its top-selling drug, Remicade. Pfizer is even suing its rival, accusing J&J of anticompetitive practices that are holding back sales for its biosimilar to Remicade. At the same time, Pfizer faces serious headwinds for its blockbuster drug Enbrel from biosimilars.

But evaluating the growth prospects for each company is tricky. For example, if Gilead’s HCV franchise stabilizes sooner than expected, the biotech could be in much better shape than many think. The outcome of the Pfizer-J&J litigation could impact the fortunes of both companies. There is also significant risk for pipeline candidates for all three of these drugmakers.

On top of all this, the possibility exists that an acquisition could dramatically change the growth dynamics for any of the three. Gilead recently announced plans to acquire Kite Pharma  and has strongly hinted at more deals to come . J&J recently completed a huge buyout of Actelion and could look for additional opportunities. Pfizer has been quiet on the acquisition scene this year after a busy 2016, but the potential passage of U.S. tax reform could spur the big pharma company to become active again.

So which company has the best growth prospects? I’ll give the slight nod to Johnson & Johnson for now, with Pfizer in second place, but things could easily change.

Finding the most attractively valued of these three stocks might seem like a slam dunk. Gilead Sciences shares trade at less than 11 times expected earnings. That’s lower than Pfizer’s forward earnings multiple of nearly 13. And it’s a lot more attractive than J&J’s multiple of almost 17.

Enterprise value-to-earnings before interest, taxes, depreciation, and amortization (EBITDA)  is probably the better valuation metric to use, though. Gilead again easily wins using that metric, with a multiple of six compared to Pfizer’s multiple of 12 and J&J’s multiple of 15.

However, we do need to think about where each company’s valuation is headed. Gilead’s valuation will probably worsen in the future as its earnings decline. J&J’s and Pfizer’s valuations should become more attractive if they grow earnings as expected.

Still, Gilead has such an advantage — especially in the enterprise value-to-EBITDA measure — that I think it merits the prize as the most attractively valued of the three stocks. Pfizer again is the runner-up.

Perhaps the easiest decision is in the dividend category. Pfizer’s yield currently stands at 3.6%. That’s well above Gilead’s dividend yield of 2.49% and J&J’s yield of 2.56%.

Pfizer wins hands-down as the best dividend stock. J&J takes second place, thanks to its slight advantage over Gilead’s yield and its great history of dividend hikes.

If you’re a younger investor with a long-term outlook, growth is probably more important to you than the other categories. On the other hand, retirees would probably weight dividend much higher than growth. What stage of life you’re in and what your preferred investing style is, therefore, could make a big difference in which of these stocks is the best pick for you.

I like all three of these stocks. After thinking through the individual rankings, though, my choice as the best buy is Pfizer. The big drugmaker has solid — although not spectacular — growth prospects. It’s reasonably valued. The clincher, though, is Pfizer’s tremendous dividend. A year from now, Gilead Sciences or Johnson & Johnson could have the upper hand. For now, though, my view is that Pfizer is the winner.

10 stocks we like better than Pfizer
When investing geniuses David and Tom Gardner have a stock tip, it can pay to listen. After all, the newsletter they have run for over a decade, Motley Fool Stock Advisor , has tripled the market.*

David and Tom just revealed what they believe are the 10 best stocks for investors to buy right now… and Pfizer wasn’t one of them! That’s right — they think these 10 stocks are even better buys.