The past two years have resulted in a lot of changes to the way that Statoil (NYSE: STO) does business. Like many of its peers, it has reconfigured its portfolio to focus on its most profitable oil and gas prospects and control costs to what seems to be down to the penny. This past quarter was a product of that work as the company posted a drastic turnaround in its net earnings results. It helped that oil prices rose considerably over that time as well.

Let’s sift through Statoil’s most recent earnings report to see what the company has been doing to improve its profitability and how it plans to carry that success into the next couple of years.

Statoil has two things working in its favor compared to most of its integrated oil and gas peers this quarter. Since the company is heavily weighted toward upstream production, its earnings weren’t as adversely affected by narrowing refining margins that hurt the downstream segments of other Big Oil companies . Also, Statoil’s presence in the U.S. is quite small compared to the rest of its holdings, so there were only marginal impacts from changes in U.S. corporate tax rates.

In addiiton, as you might have guessed, having a high exposure to production meant some considerable gains for its upstream production segments. A vast majority of the company’s production is outside North America, so it has a much higher exposure to international crude prices that are much higher than domestic prices. Statoil’s realized price for liquids was $56 per barrel. Thanks to management’s efforts to reduce costs, the company can generate rather impressive earnings at this price level.

With the business generating enough cash to cover its capital spending and dividend, management used the extra cash to pay down $3.5 billion in debt this quarter. Even though total debt was lower than the prior quarter, the use of cash to pay it down meant its net debt ratio ticked up to 29%. 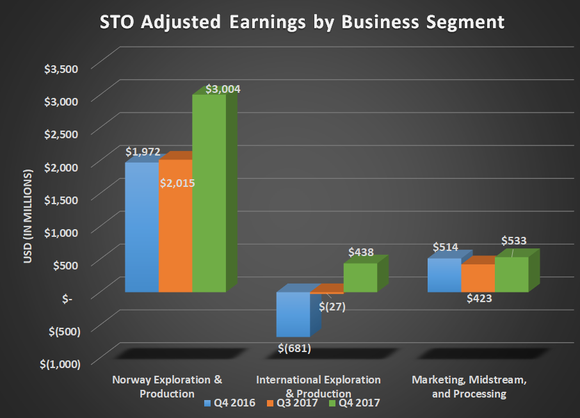 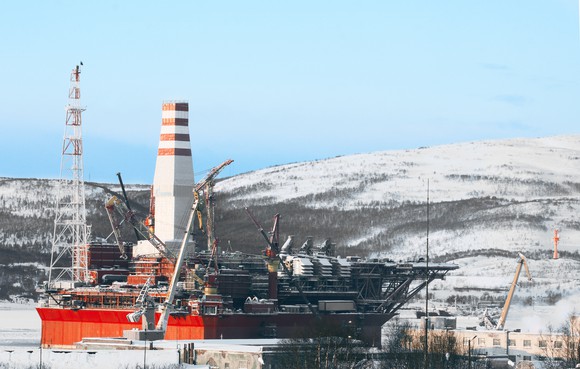 What management had to say

We expect to increase returns and can deliver 12 billion dollars in free cash flow from 2018 to 2020. With solid operational performance and realised efficiencies, we are a stronger and more competitive company. We have radically improved our next generation portfolio, and Johan Sverdrup phase 1, has now a break-even below 15 dollars per barrel. We will profitably grow production, strengthen our balance sheet, and increase the cash dividend.

The Norwegian continental shelf is the backbone of our business, where we develop new ideas and technologies, and scale them industrially to create even more value. Internationally we are increasingly targeting opportunities where we can leverage our key value drivers with an even stronger Statoil-operated footprint. 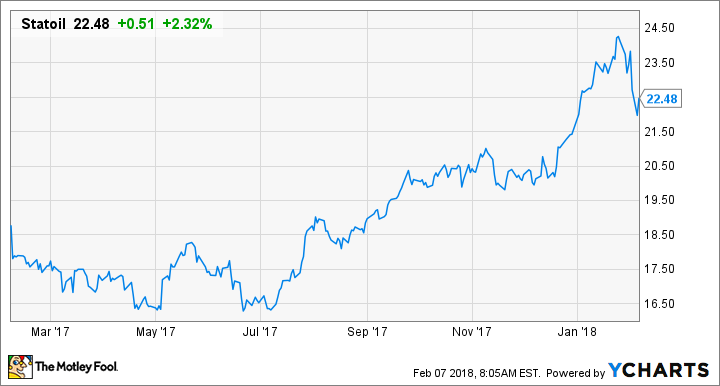 What a Fool believes

While Statoil’s production increases aren’t eye-popping, the combination of modest production growth and an ambitious cost-cutting program means that Statoil is able to make quite a bit of money at today’s oil and gas prices. With Brent crude oil prices higher so far in this first quarter, chances are we are going to see even better results in the next earnings report.

Overall, Statoil looks to be executing its strategic plan well. It’s delivering good results in its home country and intends to use those lessons to apply to other places such as Brazil. That will be important for the company’s success longer term because its international segment has been a bit of a drag on profitability as of late. If it can continue on this path, it should have a good 2018 and beyond.

10 stocks we like better than Statoil
When investing geniuses David and Tom Gardner have a stock tip, it can pay to listen. After all, the newsletter they have run for over a decade, Motley Fool Stock Advisor , has tripled the market.*

David and Tom just revealed what they believe are the 10 best stocks for investors to buy right now… and Statoil wasn’t one of them! That’s right — they think these 10 stocks are even better buys.